This tip comes from Fujifilm.

There are three main characteristics that define film: Type, Speed and Format.

Film speed is defined by a film's sensitivity to light, and is most commonly referred to as ISO. "ISO" stands for International Standards Organization, and is an industry standardized scale for measuring sensitivity to light. The lower the ISO number, the less sensitive to light, and the higher the number, the more sensitive to light. The term film "speed" derives from how quickly a film emulsion can be properly exposed. For example, film with ISO 1600 is a fast film because it is highly sensitive to light and requires a short exposure time/less light in order to create proper density. ISO 50 film is a slow film because it is less sensitive to light and requires more exposure to light in order to produce the same image density. It's important to realize that the ISO speed of a film is a fixed value and cannot be changed in the camera like in a digital camera.

Film format is determined by size and shape of the film. There are three main film sizes: 135, Medium Format and Large Format. Within each of these film sizes there are a variety of aspect ratios that can be created in a frame, based on the camera design used. The larger the negative or transparency, the more information within and less distortion or grain visible when that image gets enlarged. 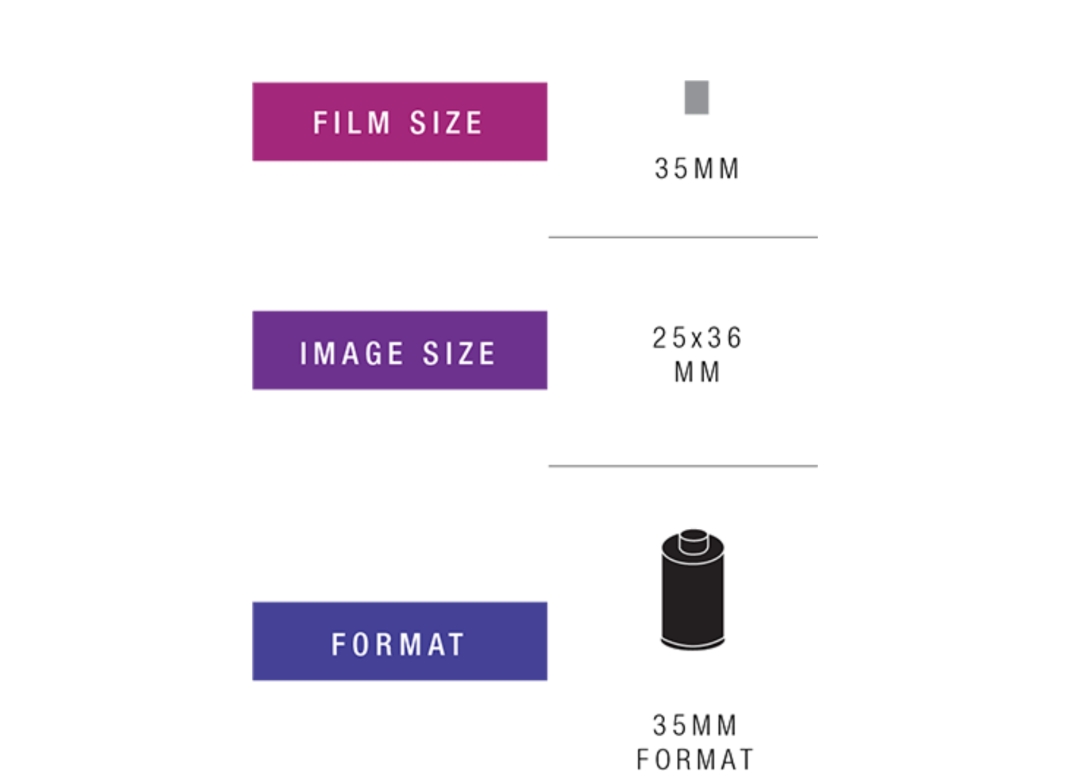 Also referred to as 35mm, it has a standard frame size of 36x24mm, and most frequently produces 24 or 36 exposures. The film has perforated edges, which allow the film to be wound to and from a spool within the camera back. 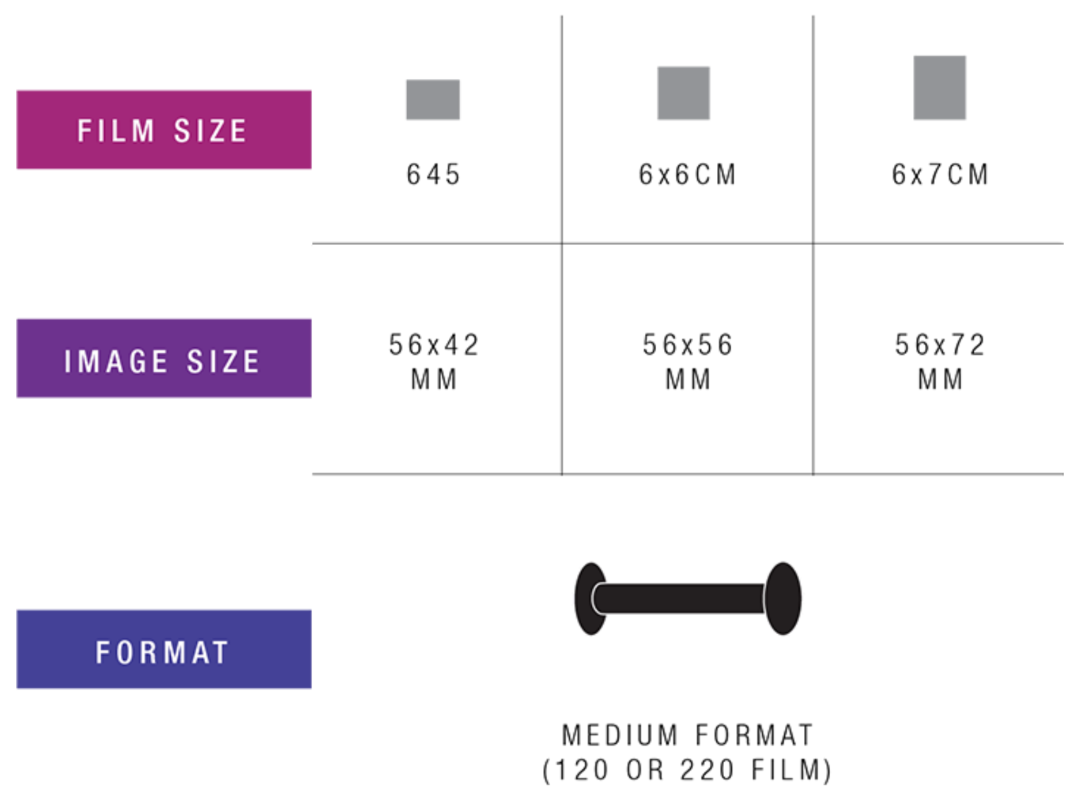 Larger than 135 film, it is 61mm wide and does not have perforated edges (the film moves from one spool to another in-camera when shooting—no need to rewind after finishing a roll). It comes in two main lengths, 120 and 220, with 120 being the most common. 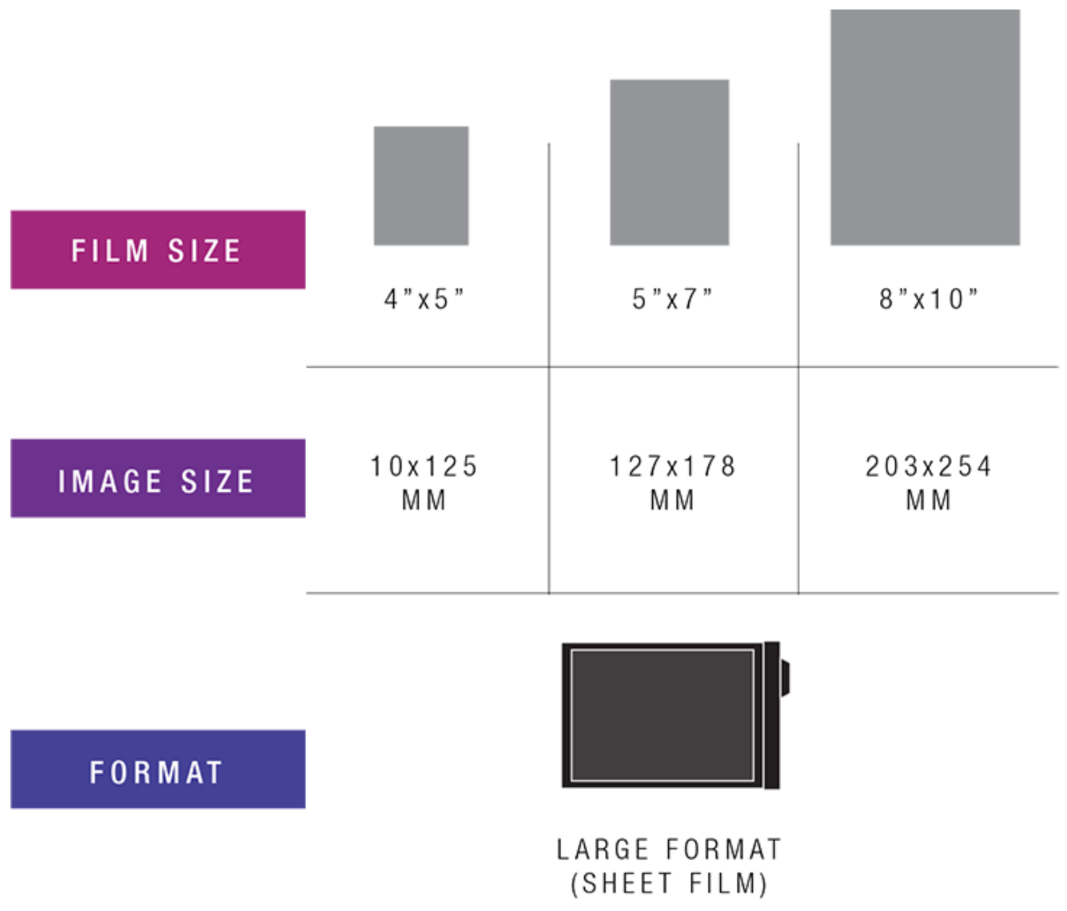 Also known as Sheet Film, Large Format is any film with a single frame size of 4x5 inches or larger. This is often called Sheet Film because each frame is a separate sheet, not on a consecutive roll or spool like 135 and Medium Format films.