Learning From Your Negatives

Learning From Your Negatives

When shooting film, your negatives are your road map to understanding the relationship between your exposures and your scan results. Your negatives can also clue you in to common camera problems, like film flatness, or film stock issues, like base fog. Our goal? To provide a tool to help you better understand why you got the scans you did and how you might shoot differently (or the same) in the future to get different (or similar) results.

Let's explore how to read your Exposure Reference Sheets along with how to identify camera issues like: light leaks, an opened camera back, sticky shutter, base fog, bracketing mode and film flatness.

Exposure Reference Sheets show a variety of information from exposures to camera issues. The exposure of each frame can be seen in the level of density (similar to how you would view your digital images): 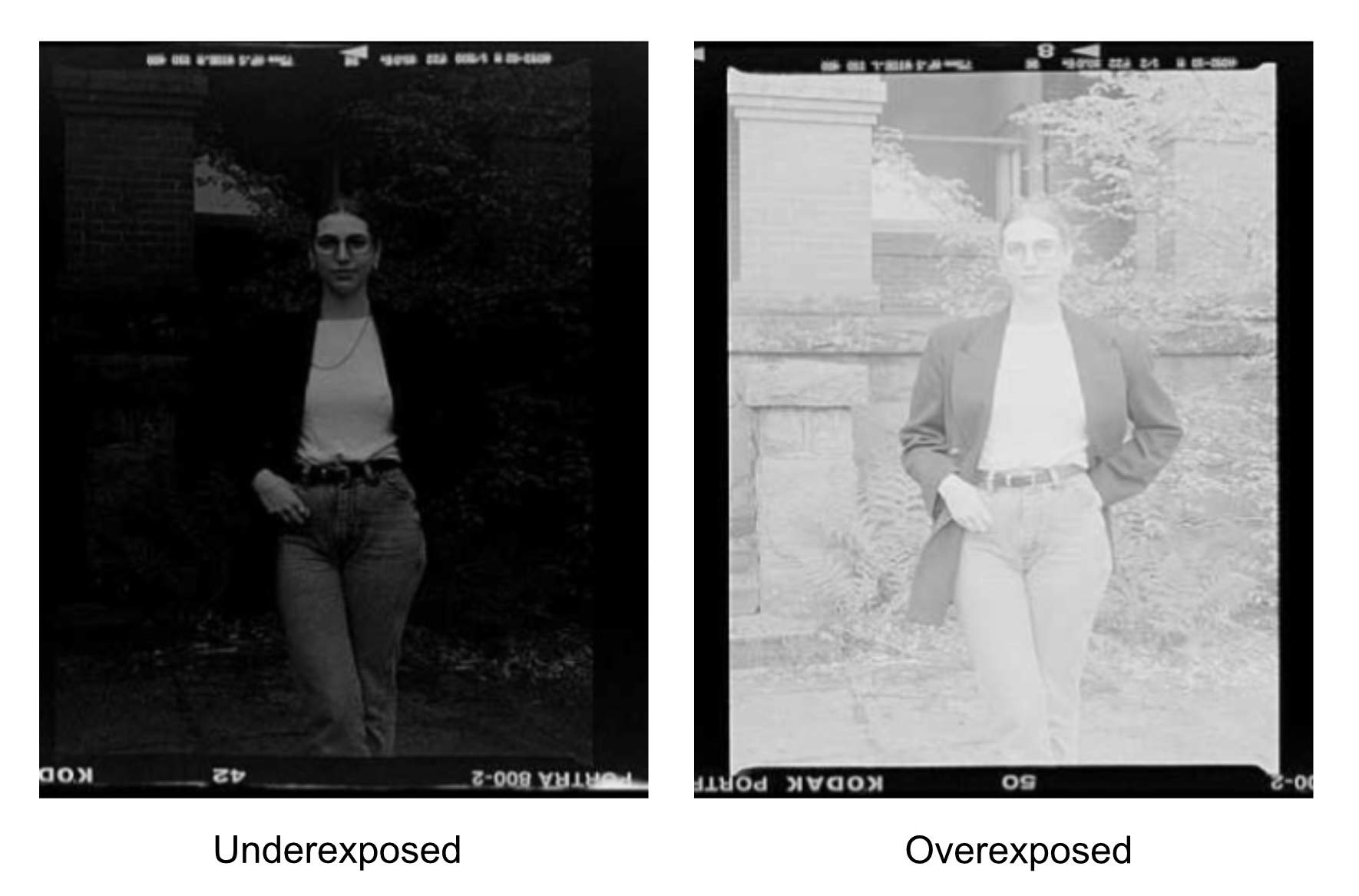 To help you further understand your exposures, refer to the exposure data (if your camera imprints it). 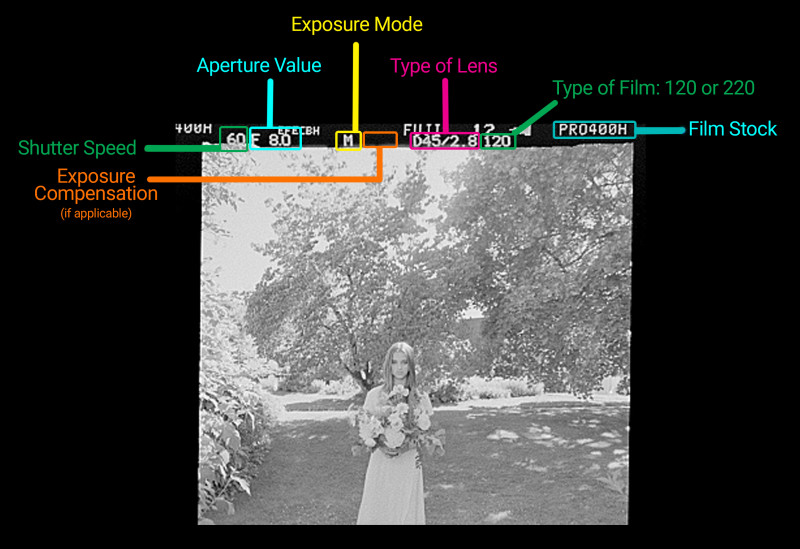 Now that you know how to use your Exposure Reference Sheets to study your exposures, let's talk about camera issues. We will cover the most frequent camera issues we see come through the lab, what they are and how to identify them. Let's dive in:

Notice the white markings across the top and bottom of the film? These are due to a light leak. If you have light leaks, your camera needs to be serviced. Here are some repair shops we've heard good things about.

The section of white seen here is overexposure caused by the back of your camera being opened mid-roll.

The unexposed space before the first frame is a sure sign this roll of film was wound too far upon loading (e.g., for medium format, it was wound past the word "start"). When your film is wound too far, your final frame will land at the physical end of the roll which is a designated space for film processing + scanning. This space is used for clipping your film and for roll numbering. When a frame lands here, it can become distorted due to these processing needs.

Take a close look down the right side of each frame: notice how dark it is? This is caused by a shutter sticking when it opens/closes. If it continues, your camera needs to be serviced.

It's two words no photographer ever wants to hear—base fog. That's right, the thief of contrast, the magnifier of grain, the harbinger of many, many headaches—base fog. What causes it? How do you identify it? And most importantly, how do you avoid it?

How to Spot Base Fog.

When identifying base fog, you want to pay attention to the density of the spacing in between each frame. When a roll is affected by base fog, this spacing becomes a light gray as opposed to a dark black. You also want to note the contrast level within each frame: when a roll is base fogged, every frame will appear very flat with little contrast.

What is Base Fog?

OK, don't freak out—all film has base fog. What? Yep. “Base” is the density of an unexposed, processed area of film. It is a section of the film that has been developed, yet never exposed to light—the space in between each frame, for example. And “fog” is the silver halide within the film that has received no exposure to light yet gains a slight amount of density during development.

Base fog is always present, but it can become a problem when it increases to the point where it produces a noticeable reduction in contrast.

Side Effects of Base Fog:

Example of a Base-Fogged Film Scan: 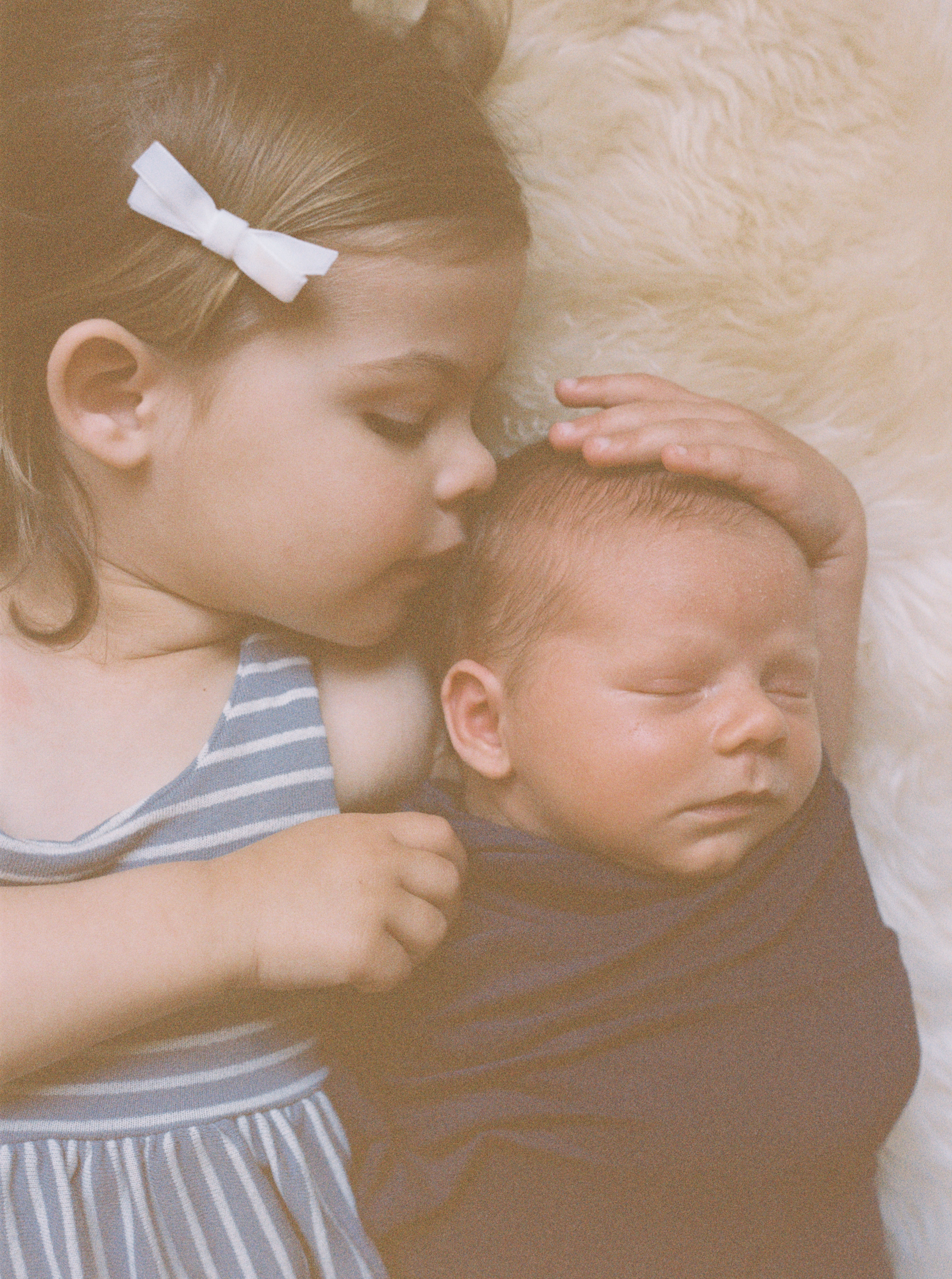 Base Fog in an Exposure Reference Sheet:

Now, see how this Exposure Reference Sheet has a wide tonal range with a deep black point in between each frame? This is what you want to see!

Base Fog Can Increase Due to a Number of Factors:

Also beware of CT scanners at airports - they're becoming more prevalent and produce much more X-ray damage than the older carry-on scanners.

How Can You Avoid Base Fog?

Be careful not to buy expired or improperly stored film. Purchase your film from a reliable source, like us!

Store your film in a regulated environment, like a refrigerator. Cool, dry environments help decrease the rate of base fog.

Travel with your film in your carry-on bag and always request it be hand-checked. This goes for both exposed and unexposed film. Never store film in checked luggage. Finally, check to see if you are flying into an airport with CT scanning technology.

If the Base Fog is more severe, consider these editing tips from Amanda Olivia Photography:

“This shot was something special, I knew I had to find a way to deliver it to my client. To edit, I converted the image to black and white and increased the clarity and contrast and used dehaze in Lightroom. Obviously, the image is incredibly grainy, but I really loved it and wanted to deliver it. I felt that at least this way it looked more like a pushed black and white Delta 3200 image!” — Amanda Olivia 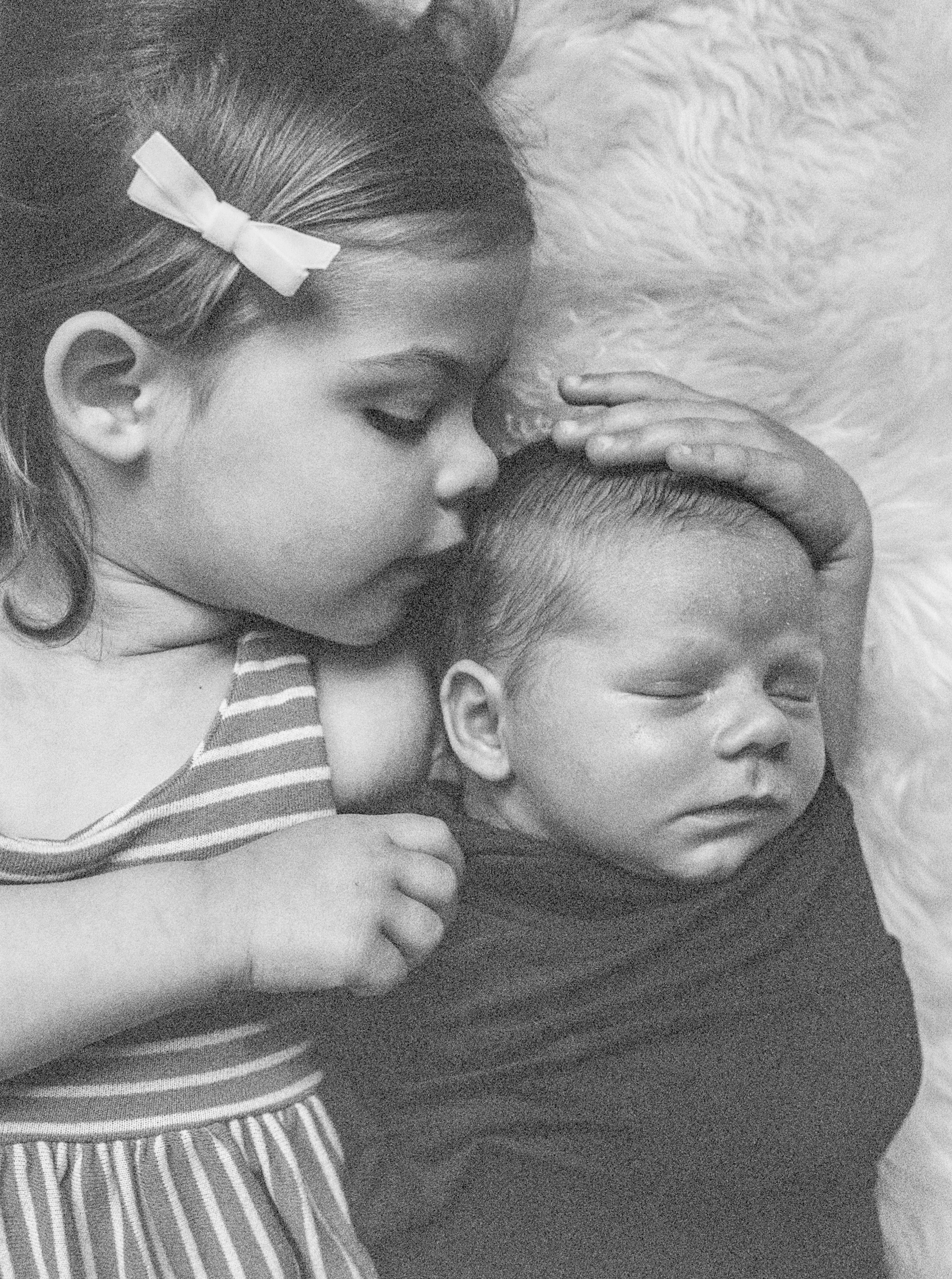 This is a hiccup we've seen happen more times than we'd like, and it can lead to some major headaches. A job can be going along smoothly, exposures are perfect, when out of nowhere— boom —bracketing mode was turned on, causing a photographer's exposures to shift from frame-to-frame.

Rest assured, our color technicians are very skilled at spotting bracketing mode and smoothing out inconsistencies in exposures. But even with all their #skills, you might still be able to catch some slight differences in your final images.

What is Bracketing Mode?

Bracketing mode is designed to take 3 shots back-to-back of the same scene at different exposures, varying in increments from ⅓ stop to 3 stops, depending on your camera. This can be handy when you are unsure what the proper exposure is for a given scene. For these circumstances, bracketing mode acts as a safety net. But when bracketing mode is accidentally turned on, it can be a nuisance.

The first exposure will be made at the shutter speed you set (N).

The second exposure will be made at a decreased Exposure Value (-N).

The third will be made at an increased Exposure Value (+N).

Check out this example, shot by Christine Pienaar:

Notice how Christine's Exposure Reference Sheet shows slight shifts in density from frame-to-frame? This represents shifts in exposure. When exposures shift in a repeating pattern, like they do here, it is a clue to us that bracketing mode was turned on. Despite the shifts in exposure, our expert color technicians were able to smooth inconsistencies and create consistent scans.

How to Identify Bracketing.

We can also verify bracketing mode is on by checking the exposure data:

This not only tells us bracketing mode is on, but it also tells us the bracketing is set to 1 stop increments. Our Exposure Reference Sheets allow you to identify this as soon as you see your scans, so it can be turned off prior to your next shoot. And don't worry, we'll be sure to notify you via email or phone when we see it, too!

*Keep in mind: if you change your shutter at any point while in bracketing mode, the pattern in exposures will NOT be consistent.

Learn How to Toggle Your Camera's Bracketing Mode.

Consult your camera manual and learn how to turn it on/off before you next shoot, just in case! 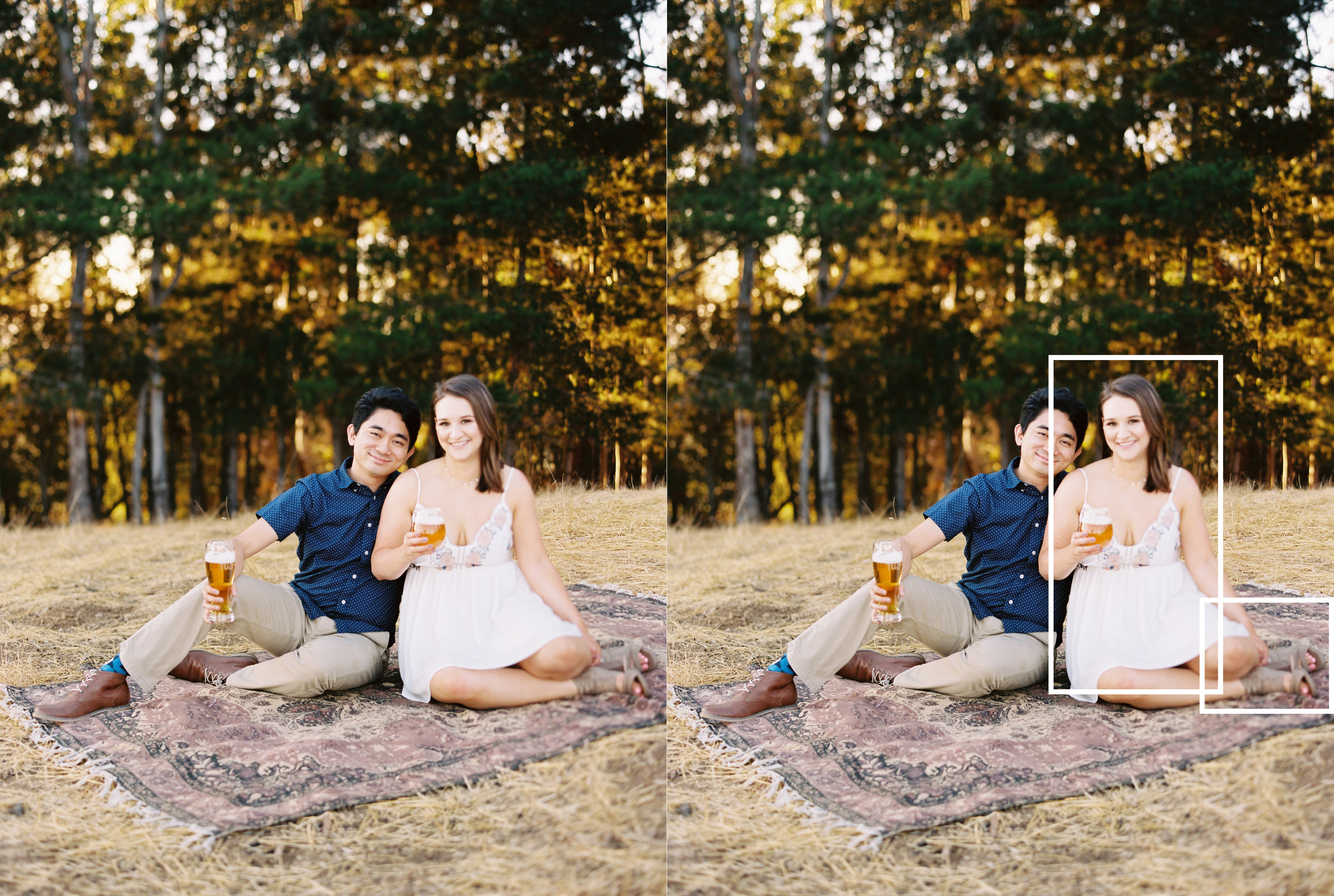 Unfortunately, many of you have seen or experienced this issue firsthand. Let's set the scene: You've taken a stunning image, the lighting is just right, and everyone is looking great, but you get your scans back only to find that one of the six people in the image is completely blurry. What happened? All your subjects appear to be on the same plane (e.g., the same distance from your lens), and you even shot at f/4 to make sure everyone was in focus. What went wrong? Film. Flatness. (Whump, whump.) 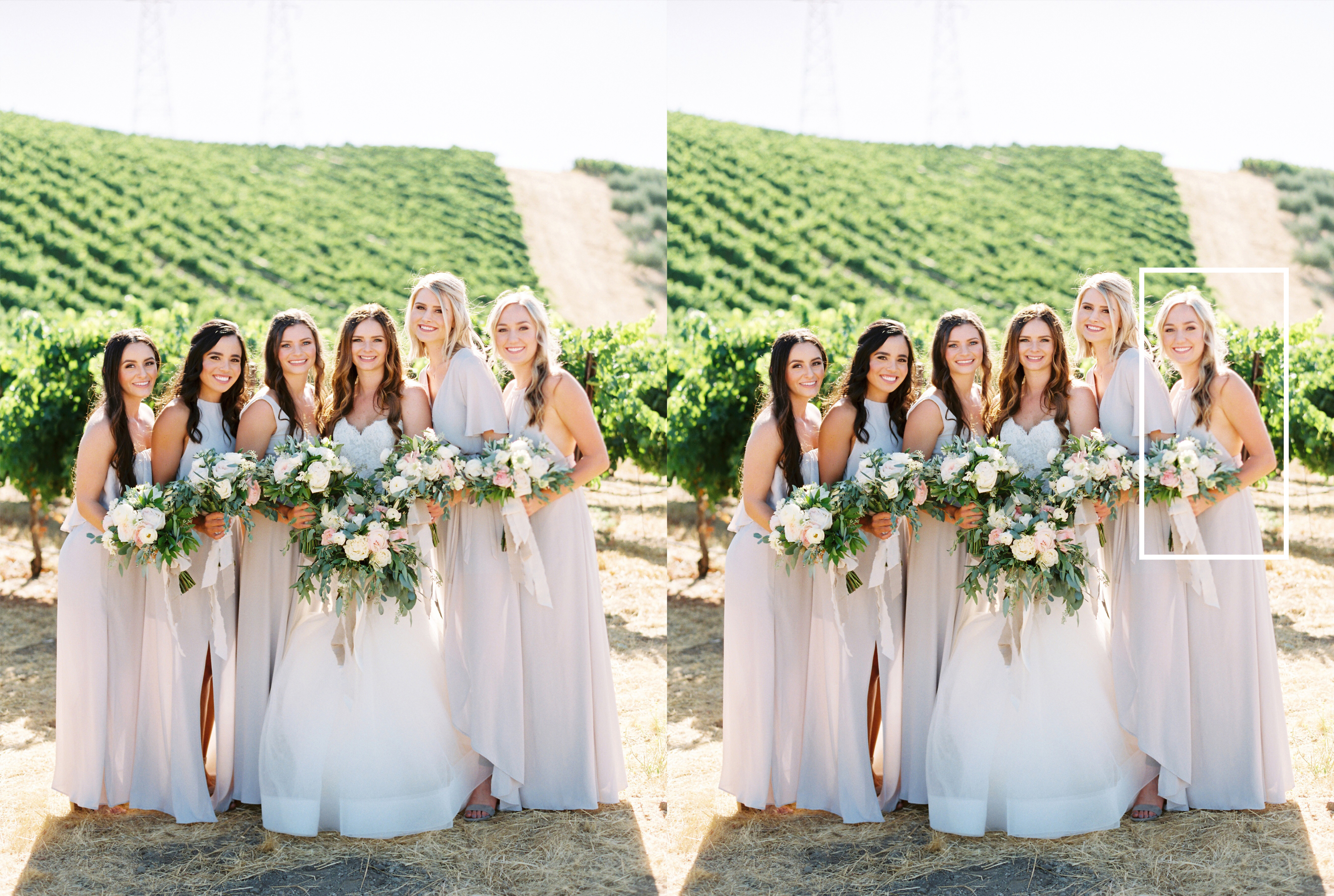 What is Film Flatness?

Film flatness is when your film does not lie flat against your insert's pressure plate. Rather, your film curves away from the pressure plate, creating a slight arch. When this happens, the arched section of your film draws closer to your lens, creating a blurred portion of the image. Yikes!

So how can this be resolved? Unfortunately, there is no easy answer. The cameras most of us shoot with are 20+ years old. And this issue can really occur at any time. The trick is to be prepared. Have multiple camera inserts ready to rock 'n' roll. That way, if you do have an insert that becomes subject to film flatness, only some of your images will be affected. 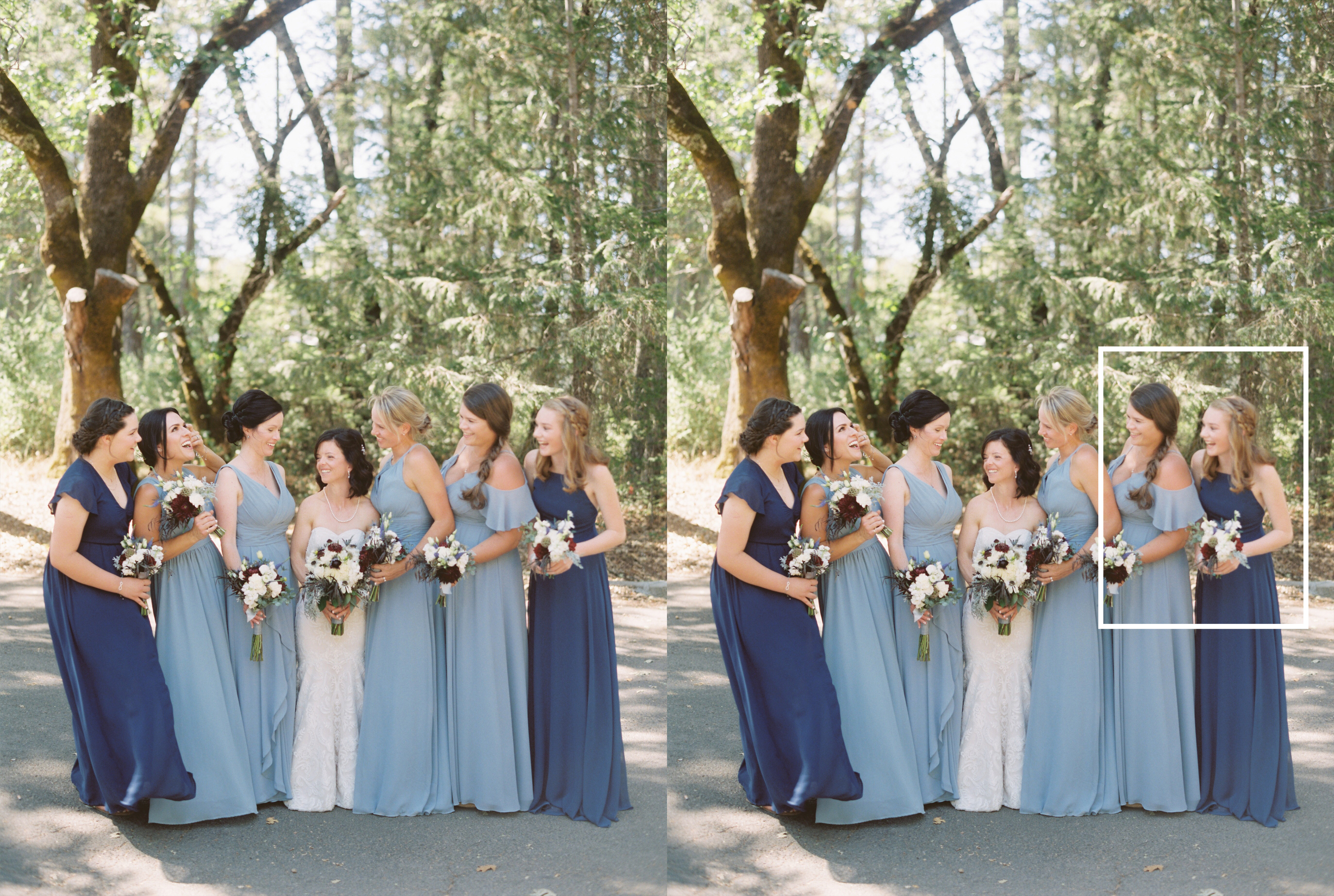 How to Test Your Inserts

Do you have multiple film inserts and you're not sure which is the culprit? Label each of your inserts “1, 2, 3, etc.” and shoot one test roll through each, labeling each roll the corresponding insert number. (Pro tip: You can use a Sharpie to write each number on the roll.)

But what should you shoot? We commonly see film flatness in group shots. Gather a few friends and have them stand on the same plane. You'll need a focus point about 20 feet away. Shoot at f/2 (or as low as your lens can go). We recommend shooting a few frames back-to-back, then pausing in-between each frame to give the film time to loosen tension (if it's going to) and then shoot back-to-back again. If your insert has film flatness, these steps will bring it out.

Once you receive your scans, you can analyze them to determine which insert needs to be sent off for repair.

We get how frustrating film flatness can be, and that's why we will run your test rolls free of charge.